Legal Status (US): Listed as a controlled substance


DMT does not aromatize, nor does it appear to have any progestational activity, yet some users still experience gyno symptoms and bloat from this compound. This is likely related to the lack of androgenic potency from this compound (to antagonize the effect of estrogen). DMT may also contribute to gyno by displacing estrogen (and testosterone) from SHBG. It has also been proposed that DMT can inhibit 11b-hydroxylase and thus increase intracellular sodium and water retention by building up mineralcorticoid levels.


Depending on where you look, DMT has been reported to be 2-12 times more anabolic and 0.4-2 times as androgenic as methyltestosterone. It has been proposed that DMT is a naturally occurring substance because it has an almost identical structure to delta 2-androstenol, a naturally occurring pheromone in mammals. However, being a 17aa steroid hormone makes it synthetically altered and not naturally occurring. Either way, it is now a controlled substance in the United States.


Users should expect significant strength increases, weight gain, and bloat. Weight gains upwards of 20lbs in 4-6 weeks are not unheard of with this compound. The most obvious physical side effects will be strong muscular pumps, shortness of breath, high blood pressure, oily skin, and bloating. If users wanted to minimize toxic effect on the liver or other side effects, DMT could be used at doses as low as 10mg/day for a decent effect.


Being that this compound is methylated, it should not be stacked with other methylated compounds. Having moderately low androgenic activity, DMT may negatively affect the libido and erectile function. This side effect could be offset by stacking DMT with testosterone or one of its non-aromatizing metabolites to preserve DHT levels. 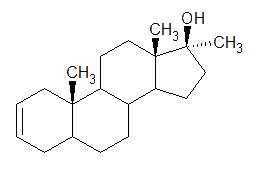