Characteristics
2-cyano-dromostolone is a 17aa molecule relatively new to the scene with very few reviews as of yet.
It has a cyano group attached to the 2 position. The chemical structure is the same as methyldrostanolone (Superdrol), except it has a CN group on the 2 position instead of a methyl group. It is a C-17aa steroid and it will be liver toxic. Although, due to the lack of the 4-ene on ring A and lack of 2-methylation, liver toxicity may be reduced relative to a di-methylated steroid such as Superdrol.


So far, feedback is very limited for this compound. However results would be expected to be fairly lean as this compound cannot convert to estrogen. Based on the chemical structure the anabolic potency would appear to be fairly potent with moderate androgenic potency.


At the time of this writing there was only one manufacturer to bring this product to the market and there seems to have been a nomenclature mistake on the labeling for this steroid. The chemical name contains the term “androst”, assuming that there is some sort of ene group on ring A. But there does not seem to be such mention of an ene group on ring A. Therefore, the term androst should be androstan. But if this is the case, the 2-cyano group needs to be stated as alpha or beta. This makes a big difference, since usually C2-alpha groups are significantly more effective than beta.


There are studies about other 2-cyano steroids such as 2-cyano-DHT and 2-cyano-progesterone. In separate studies, one done on dogs, it was seen that both of these 2-cyano steroids caused inhibition of 3b-HSD enzyme. This inhibition would cause severe adrenal suppression. This is a very unsafe inhibition. Whether it occurs in this cyano steroid is unknown, but users need to be aware of this possibility. 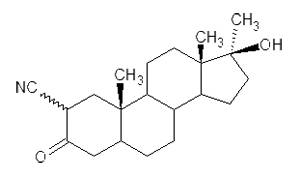