Characteristics
6-OXO is a steroidal aromatase inhibitor, known as a suicidal inhibitor because it permanently binds to the aromatase enzyme. It is used for its anti-estrogen and testosterone boosting effects.

Another interesting element to these articles is that despite the supposed increase in testosterone (enough to cause significant improvements in body composition if given via injection) no improvements where found for fat free mass (FFM) or strength. Therefore, 6-oxo is either a weak AI that doesn’t really inhibit estrogen at the recommended dose and simply converts to metabolites which give false readings, or it actually does increase testosterone, while the 6-oxo metabolites antagonize the androgen receptor enough to block any anabolic effect from testosterone.

Either way, no ergonomic or real world benefit could be found after 6-oxo supplementation.
Its also worth mentioning that 6-oxo should never be used post cycle, as its steroidial effects would likely interfere with recovery of natural testosterone production. 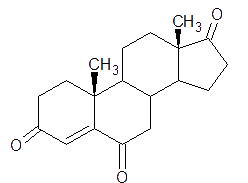