Legal Status (US): Listed as a controlled substance

Cannot aromatize to estrogen either directly or through any of its metabolic products. However, 1-Testosterone, being a 5-alpha reduced steroid, is highly androgenic; it is very similar to Dihydrotestosterone (DHT). Many side effects associated with excessive levels of DHT, including male pattern baldness, testicular shrinkage, benign prostate hypertrophy and acne can occur with 1-AD usage.

1-AD was discovered in the 1940s and a metabolic study was published in 1972. In the 1990s governments worldwide tried to eliminate access to anabolic steroids. This led to the rediscovery of 1-AD and 1-Testosterone by chemist Patrick Arnold compounds that (in some countries, at least) were not covered by existing anti-steroid laws. 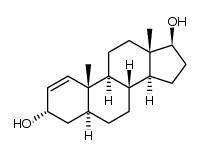